I can’t believe how long it has been since I wrote the last post.  Two full months.  One of the problems with depression is that when it gets you down, you just want to hide away.    I make myself go out and do what I am paid to, and I take great care not to let people see that I have what is still a very misunderstood mental illness.

I don’t need the gratuitous comments and advice that have ensued whenever I confided in some people.  I don’t need to “just buck up”. I don’t need to “find a woman”.  And I already know I hide it well and seem so cheerful.  It is what I do.

I had quite a lot going on, and some of it was pretty interesting, even exciting, but I was waiting until I felt right before I wrote about it.  I still don’t feel right, but it is long overdue.  My future self will wonder what was going on.

The best  and most exciting news was the trip we took down through the Gibson.  The Youth team formed a convoy to accompany a traveller down the back road from Balgo to Kiwirrkurra. We used the opportunity as a team building exercise. Five 4WD vehicles across the Little Sandy and Gibson Deserts.  We travelled on tracks over desert and sand dunes, dry riverbeds dry lake beds, and rocky ridges, through spinifex and scrub.   It was a three day trip to cover the 540 km from home via Balgo to Kiwirrkurra community, and I loved every minute, every kilometer.

We camped out under the stars. I believe it was the happiest few days I have had in a very long while. Some photos I took on the way are on my FaceBook page here.

Molly the dog was with me and we both had a really great time.  After Kiwirrkurra we drove out to the Tanami and down to Alice Springs where we stayed for a couple of nights before returning once more up the Tanami.  We were away for a week in all. 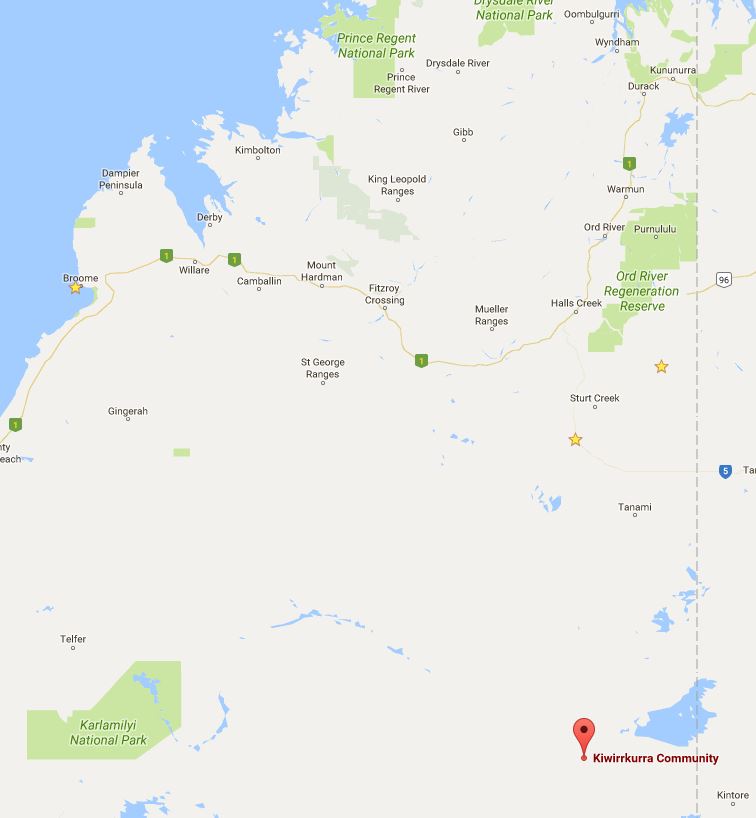 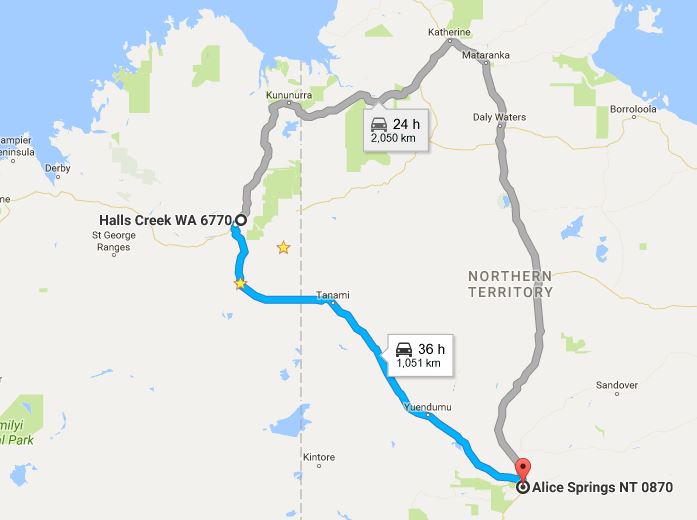 Google maps’ claim that it is 36 hours from Alice to Halls Creek is quite wrong.  We did it in 12 with stops.  Mind you, It would probably have taken me a bit longer had I not been trying to keep up with the others.   I drove my own Landcruiser on the trip, because my troopy was in for maintenance, and because I really wanted to see how she would go through the outback.  She went great.   I was not the one who got bogged in the sand dunes!

While I was away, A good friend in Halls Creek babysat the emulets for me.  Incidentally the two emus became became three since I last posted.  The last to join me was much smaller, indicating that he had not been as well fed as his siblings since being orphaned.

Shortly after I brought the chicks home to Billiluna I was given an orphaned Joey to care for as well.   It was male, and very young, just a few weeks old, and I soon knew I would not be able to feed and care for him.  I could keep him alive for only so long on honey water and electrolytes.  Joeys have special needs for hourly feeds and cannot be given cows milk.

So I contacted Kangaroo Haven in Kununurra and arranged to deliver him there.  I had also become increasingly aware that the Emus would soon be needing more care and protection than I could provide. In addition, I had been quietly advised that there were certain folk eyeing them up already for culinary purposes.  It was extremely unlikely I would be able to keep them until they could be released. So with some reluctance I took them, too, to the sanctuary. Once I got there, I had no regrets.  It is a wonderful place run by lovely people.  They will be safe and happy, and eventually released in an area where there is no hunting.

I finally cleared the last of my possessions out of the Halls Creek house.  Some of it is now stored at a friend’s house, in the spare room, the rest is here with me in my little donga.  Which means there is barely room for me to move here.   I feel like one of those elderly smelly old hoarders I used to visit with the public health nurse.  Surrounded by piles of crap I cant get rid of, making my way between rooms through little corridors in the rubbish.

The fact that this rubbish is all that is left of my past is the only thing that stops me throwing it all away.  I have a little bit more sympathy for those old former clients now.

Just before my last run home with the final carload of stuff, I lost Molly.  I let her out of the office in Halls Creek for a few minutes. She usually just sniffed around the trees waiting for me but this time she vanished.  I searched the town for hours with no sign of her.  I can only assume she got into someone’s car and went off with them.  There has been just one (doubtful) report of her since.  I think she is gone to another town or community.   This has not improved my outlook any.

Then, a real tragedy.  Just over a week ago, one of my young people, and two others were killed in a car crash. Another is still in critical condition in hospital.  This has naturally had a sad effect on the community here.

Then Sally had a close shave. She’s fine, but she is very lucky.

Since she started jumping the fence to eat the neighbour’s frangipani, I have given up keeping the gate closed, and she wanders where she will. She definitely misses Molly.  Even though Molly pestered the daylights out of her, wanting to play, since Molly has been gone Sally has been wandering around bleating for her like a lost sheep.  Sometimes she hangs out with Sadie the Camel, and if I am all there is she will hang out with me.

I drove the troopy to the other side of the village, quite unaware that Sally was trotting along right behind me. When I got to the seedy side of town where the nasty car-chasing dogs hang out, I found I was the centre of their attention.  A whole pack of them.

Except I wasn’t. Sally was.  She did not panic.  She closed in for my protection as she usually does when strange dogs are around. While I was shouting at the dogs and warning them off, she got too close to the troopy, which was still rolling along, and she went under it.

I was going really slow as usual. around 10-15 KPH.  Running over anything or anyone is my greatest worry here. It would be bad enough to bowl a dog, but the kids too tear about on foot, or on bicycles, quads and motorbikes without a skerrick of road sense.

I got Sally into the back of the troopy with the help of a couple of kids and concerned mums and took her home. I was really worried. However, she got up and climbed out of the troopy by herself. After giving me a reassuring nuzzle as if to let me know she did not blame me for the incident she limped off to eat some grass. I have been keeping a close eye on her in case of internal injuries but apart from a limp she seems ok.

She is not wandering far though.

I sold my motorcycle at last over the weekend just past. The money is in the bank, but I doubt I shall ever be riding two wheels again.   Since the long drive two months ago, the pain in my legs became worse and worse.

A fortnight ago I saw the GP on her Thursday visit to the clinic here. It was so nice to be taken seriously and not just fobbed off with “Yep- Arthritis”.  She did some tests, looked concerned and and did some more.  It seems the muscles are withered and I have no reflexes in the right leg.  “This is not your legs”, she says, “it is your back”.   She orders a CT scan.  I went to Kununurra last Thursday for it.  I shall be discussing the results with the doc. in the coming days.  However, from what the Tech says, my back is fecked.  It remains to be seen just how fecked, and what the implications are for my future mobility.