This has been perhaps the shittiest year in my life, not so much personally – though that has not been particularly positive – but because of what is going on in the world. Climate change, extinctions, storms, fires, political empire declining and falling. Caligula suggesting he might like to hold on to the reins of Incitatus. The world is Orwellian. Not 1984, but Animal Farm.

Meanwhile, here in the land next to Godzone, Spring has unequinoxiquivocally arrived. The thunderstorms have begun, and the temperature soars. Time for spring cleaning the caravan. There is quite a bit of mildew on the canvas sides of the poptop, and cooking residue at the kitchen end.

Time also to get rid of all the junk I’ve collected, and somehow managed to keep from the thieves, as it is all just meaningless clutter now.

Then I may prepare to move on. Perhaps I’ll head back to Katanning in the new year, if the borders open. I have a part time job offer in the area. One not too physically demanding. I would have liked to return to NZ but my last trip did not give me reason to think it was such a good idea.

Some folks do say… that just on midnight every night (though sometimes a little later) an eerie, grey-clad, hooded figure emerges from the steaming ablution block and walks unsteadily round the camp, leaning heavily on a walker, the wheels of which groan ominously in the misty moonlight. The grating of his arthritic knees crackles out louder than the complaining wheels.
Young short-term campers shiver in fear, and pull their sleeping bags over their heads. Everyone knows better than to look. No one, even those still out of bed, dare speak to the apparition. He passes by, swearing softly under his breath, and disappears into the night.

Living the quiet, socially distanced life, without being able to swim again for a bit, the focus has been on food of course. And of course I’ve put on a bit of weight. But I shall deal with that. Once more.

Why am I, a Pacifist, playing on line battle Royale war games? Because I can’t find a good Dungeons and Dragons game. I miss the social interaction. In PUBG, twenty five teams of four fly into a battle zone, and must find resources, defend themselves and defeat the other teams. Last team (or person) standing wins. Unless you set up a team, the game chooses three random team mates for you. You may get kids who haven’t a clue and drop you in the shyte straight away, or good players who have skills. I’m still learning.

The game algorithm has already labelled me a pacifist, because I have a low kill rate. I try to avoid combat and kill only when the alternative is to be killed. The time I’m not hiding or fighting I spend gathering medi packs, etc, and trying to revive injured team mates. Much as I did as a healer in D&D.

Despite my low kill rate, in over a hundred games already I have achieved an excellent survival rate of 72%. I’ve made it into the last five several times, and collected three chicken dinners. That’s three wins. I’ve been playing only eight days. It’s not an easy game.

In that eight days I’ve made friends with an Inuit in the far north of Canada, a man almost my own age in Ohio, a young woman in Hawaii, another in Cambodia, and a young man from Vava’u, Tonga, who is currently in Nelson, New Zealand. Those are the ones who speak English. I’ve also had invitations to rejoin others with whom I have no language in common.

We aren’t always all on line together, but there are two players I have been meeting regularly, to team up with. The young woman is reserved, not chatty, but an excellent player. I don’t blame her for being circumspect with an older male on line. My friend in Ohio is just a little younger than me and we have already exchanged email addresses and phone numbers. We talk as we play. He’s in it for fun, and is always cheerful win or lose. I enjoy his company.

I’m not going to write a full critical review of the game. I don’t know enough to to critique it. I will only say that the action and movements, are amazingly good, the scenery details and avatars are photo realistic. Mastering the movements on an iPad is not impossible, as the screen can be customised to suit. I suspect it may be easier than using a mouse or joystick and keyboard.

In any case, it is a fun way to spend a few hours, and it is socially distant interaction at its best. Except for the killing part.

That’s kinda fun too. Because it’s all pretend.

Just after returning home from having the latest batch of suspected melanomas and carcinomas biopsied, I received a phone call from the Black Dog Institute, of which I am a supporter.

Odd coincidence. My mental state fluctuates of course, but lately I’ve been having thoughts of “what if” my recent worry about myeloma had been real, and I faced chemotherapy. Or what if one of (or all of) these biopsies came out with a similar prognosis.

Of course they were asking for an increase in my admittedly modest contribution. I had to point out that I’m a pensioner now. I choose my charities carefully and allocate what I can. There’s no spare change.

I told them they shared my best regards along with the Flying Doctors, the Cancer Foundation, and Water for Survival, of which I was a founding member.

The young lady had a prepared spiel designed to lure me through a series of affirmations to a final commitment to donate. It started with the statistic that one in five Australians have mental health issues. I confirmed I was aware of this, and in fact had only recently met with four of my imaginary friends to discuss which of us it might be.

This did not draw a laugh, or put her off her stride, so I let her continue through her script. At the end I could only repeat what I’d said already about my budget.

However. I do feel strongly supportive of this organisation. Their website provides a lot of help . So I would like to recommend readers share it. Links below. If you have a friend who, well, you know. Help.

I am flint-struck spark;
I am warming winter hearth
I am fire beneath cauldron

My flame is bright and burns forever.

I am green-clad maiden, midwife and mother
I am milk of the breast and suckling infant
I am cow and calf

Surrounded by nineteen sky-stones,
I am Queen under the Hill.

At 03:43 I was awakened by the load clatter of something falling – or being knocked over – on the sink bench. Even in the pitch darkness I knew it was on the bench because there were resonances at 2.37 kHz, which as everyone knows, is indicative of stainless steel, and around 460 kHz, close to that of Pyrex glass. This latter led me to believe the fallen item was my Guinness glass.

In the past, I have had a native bush rat come for a visit, and, once, a huge tree frog knocked a few items off the shelf, but this is midwinter. The door and windows are shut, the vents are closed. There should be no visitors larger than a huntsman spider. A spider that can knock a glass over, especially one as massive as my Guinness pint glass, is a wee beast I’d be keen to see.

I arose, turned on the light, and walked down to the kitchen, a mere matter of some four metres from my bunk. At first I saw nothing awry. My Guinness glass was inverted on the bench as I had left it following washing it out after drinking my evening cocoa. It was not knocked over.

Perhaps it was not exactly where I had put it?

My amazing powers of observation swung into action. I compared my memory of the scene after washing up and the current observation in my mind. The glass had clearly moved.

Heavy glasses do not move themselves. I searched for the culprit, or of some other sign of it’s presence. No gnawed tomatoes 🍅. Probably not a rat. It’s far too cold for frogs to be out and about.

In the cutlery drainer was standing a pair of stainless steel tongs, arms spread wide; one in the holder, one out. Not as I had left it. Here was the culprit, without doubt. The tong’s spring loaded clip, which holds the arms closed for storage, must have let go. The arms spronged apart, moving the glass and producing the disturbance.

Mystery solved with Mycroft keenness. Nothing to see here. Back to bed.

It seems that despite my efforts in taking an iron supplement, eating liver and drinking Guinness, my haemoglobin levels and iron levels remain low.

In addition, it seems my vitamin E levels are also low.

Vitamin E deficiency can cause nerve and muscle damage that results in loss of feeling in the arms and legs, loss of body movement control, muscle weakness, and vision problems.

I used to be so fit and active.

Don’t think I’m not aware of the iron E. 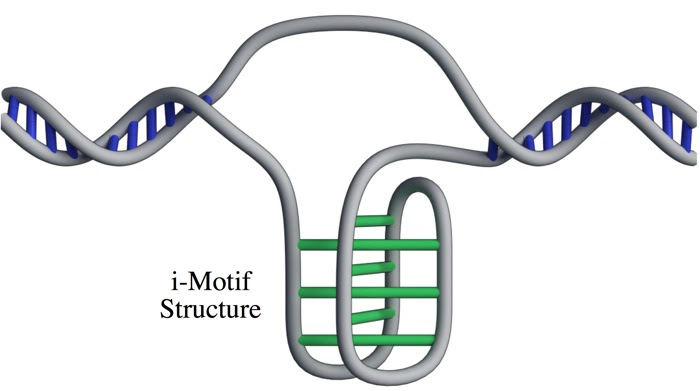 Most of us know the story of how the famous double helix structure of DNA was discovered. Many of us also know that a couple of scientists failed to give Rosalind Franklin due credit for her contribution.

What we may not know is that there’s more to DNA than that twisted ladder. In recent years scientists have discovered a twisted, four-strand knot called an intercalated motif, or i-Motif. Previously only seen in vitro, it was observed in living human cells by scientists at the Garvan Institute of Medical Research in Australia.

Genomicist Marcel Dinger, who led the research team, explains, “In the knot structure, C [cytosine] letters on the same strand of DNA bind to each other – so this is very different from a double helix, where ‘letters’ on opposite strands recognise each other, and where Cs bind to Gs [guanines].”

Future research will help us understand how these i-Motif knots influence our biology.